Prehistoric goat lived like a reptile on Spanish island 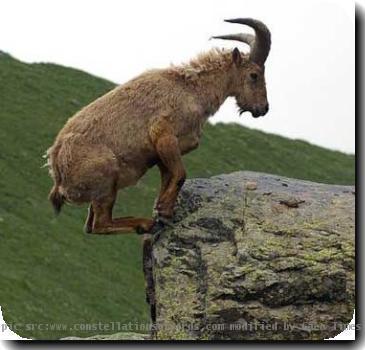 WASHINGTON - A new study has determined that a prehistoric goat on a Spanish island survived for millennia on a resource-poor island by living like a reptile, changing its growth rate and metabolism to match the available food supply.

Fossils of the ancient goat, called Myotragus, were first found on the Spanish island of Majorca in the early 1900s. The bones show the species lived on the island for more than five million years.

Since resources can fluctuate dramatically on isolated isalnds, reptiles often displace mammals in such places.

But, according to a report in National Geographic News, the new study, which looked at the bone histories of several Myotragus individuals, revealed that the goats may have fine-tuned their growth and metabolic rates both seasonally and during irregular times such as droughts-just like reptiles.

“This way, it burned only the energy that was available from the environment, slowing down the ‘fire of life’ in times when resources became scarce,” said study co-author Meike Kohler, a paleobiologist at the Autonomous University of Barcelona, Spain.

The lizard-like lifestyle, however, meant that Myotragus’s newborns were extremely small-the sizes of large rats-and the young took years to reach adult size.

The goat also saved a lot of energy in its nervous system-among the body’s most “costly” tissues-by sporting a brain only half the size of a similar-size hoofed mammal and eyes only a third as large.

The combined effect was that Myotragus was sluggish, with slow reaction times, the bone study suggests.

Like modern-day reptiles, the goats probably “saved as much energy as possible just lying around and basking in the sun,” Kohler said. (ANI)

LONDON - A Roman settlement filled with ancient artefacts and human remains has been unearthed at ...

LONDON - A giraffe-sized dinosaur, previously thought to be too heavy to fly, virtually pole-vaulted...

Weak script, too much blood and gore in 'Piranha 3D' (IANS Movie Review)

WASHINGTON - Remains of the youngest Neanderthal ever found suggest that those who made it to the 't...

NEW DELHI - After rocking US box offices with its stupendous success, horror movie "Piranha 3D" will...

NEW DELHI - A museum in East China's Shandong Province has been recognized as the world's largest mu...

Early humans may have been prey, not predators

WASHINGTON - A new study from University of Minnesota suggests that our human ancestors were not hun...

WASHINGTON - Scientists are using an unusual resource to investigate ancient climates-prehistoric an...

Early humans may have been prey, not predators

WASHINGTON - A new study from University of Minnesota suggests that our human ancestors were not hun...
Copyright© 2010 The Gaea Times