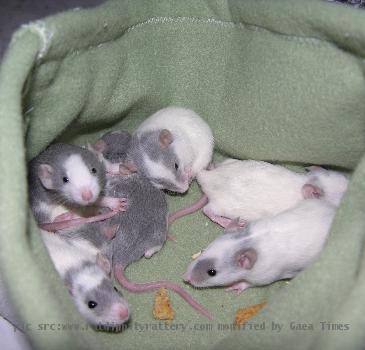 NEW YORK - For many, rats are not the first choice when it comes to keeping pets and they probably aren’t even the last. But Dianne Rochenski loves rats.

The Manhattan woman keeps rat figurines in her living room. And her favourite movie, without a doubt, is ‘Ratatouille’.

And every night, when Rochenski goes to sleep, she curls up in her bed next to Remalina and Christiana, her beloved pet rats, reports The New York Daily News.

She’s among a little-known segment of New Yorkers who keep the city’s most notorious pests as pets. Rat owners rave about their unlikely companions, describing them as playful, clean and more affectionate than dogs.

“They’re not your common companion animal, but they’re more common than we realize,” said Sandra DeFeo, executive director of the Humane Society of New York.

Tia Foster, another rat-lover, lets her two rats, Archimedes and Apollo, run freely throughout her Harlem apartment, which she also shares with her four dogs - two pit bulls, a rat terrier mix and a chihuahua.

“My chihuahua is in love with them. She’ll bat them with her paw. She runs around in a circle and lets them chase her,” said Foster, an animal activist.

Rochenski, a widow with a 25-year-old daughter, has become used to fending off her friends’ playful teasing.

“People joke with me. They say, ‘What if you meet someone?’ Well, they’re going to have to accept this,” said Rochenski, pausing as she pointed to the rats on her bed.

Facebook-addict crooks make it easier for US cops

NEW YORK - Criminals in the US are bragging about their murders, rapes and robberies on social netwo...

NEW YORK - A camouflage-clad dance troupe trying to make it to a live TV talent show set off a rush...

NEW YORK (GaeaTimes.com)- The sizzling blond beauty Malin Akerman was all in praises for the...

7 men busted for playing chess at US park!

LONDON - Hollywood actor George Clooney was honoured for his philanthropic works at a function in Ne...

Guantanamo detainee acquitted of most charges

NEW YORK - A jury acquitted the first Guantanamo detainee to stand trial in a civilian court of near...

Miranda Kerr puts her apartment up for sale

MELBOURNE - Australian model Miranda Kerr has put up her Manhattan apartment for sale, as she and...
Copyright© 2010 The Gaea Times